Military watches have substantially different components as compared to civilian timepieces. They also have contributed to the evolution of the watch in many ways.

The uses to which military timepieces are put are much more widely varying than the applications that civilians use timepieces for, by and large.

There are also some professions that require a sophisticated timepiece that has superior abilities when compared to the average watch. The need for functionalities not commonly found in other time pieces stems from the applications and stresses which the timepieces are used for and must endure.

To have a watch that can withstand certain rigorous activities, the watch must be designed in a special way with special components to allow for normal functioning in extreme circumstances.

Long ago, timepieces were highly unreliable, and were not very useful for navigating the sea because the salty, damp air wreaked havoc on their delicate internal machinations. Brass was then implemented in timepieces that were to be used at sea, potentially by a navy.

The brass inner workings of the timepiece allowed it to be used reliably at sea without the excessive failures of timepieces that were created out of materials other than brass.

The utilization of brass in sea-faring instruments and timepieces represents an early advancement of timepiece technology to allow for the use of the piece in a more rigorous environment. 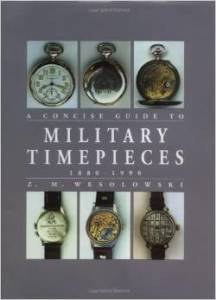 A Concise Guide to Military Timepieces

Initially wristwatches had ceramic enamel coverings, which while clear were also delicate. To be constantly worn on the wrist the watch had to be durable. So to accommodate for this, a metal protective grill was made available.

This proved popular with military men because it increased the life of the watch by protecting against accidental damage to the enamel watch face covering.

However, this eventually proved problematic due to the glare from the sun that would reflect off of the metal grills and enamel faces. This had the drawback of potentially revealing the position of an infantryman to the enemy, even over substantial distances.

There are several other features that military watches require. Pilots and other military personnel who must perform tasks at night require a watch that they can read while they work. For this purpose, they use watches that have illuminated bezels, numbers, or hands.

There are several ways to illuminate a watch. The watch may use slightly radioactive materials such as tritium. Tritium is produced in a nuclear reactor and decays over time as it gives off light.

Another use for which the military watches are required to have special construction is for use at sea. The watches of submariners must be able to handle the rigors of the environments to which they are exposed, such as frequent dampness.

Also, the watch must be constructed of special materials so as not to interfere with the submarine, nor be interfered with by the submarine itself.

Watches made for divers are another area of military time piece technology where the rigors of the environment necessitate that the watch be made to exacting standards utilizing techniques that make it able to perform its task accurately even under the added stresses of military application.

Watches for divers must be waterproof. Many watches are water resistant, but not water proof. Water resistant watches can withstand brief contact with water, but ultimately cannot be used for diving. A diver without a diving watch might quickly lose track of the time, which is key for diving.

When ascending after a dive, the diver performs what are known as safety stops. These stops are where a diver stops his ascension for a specific period of time to allow for smooth decompression. If a diver did not know how long they were at a given depth or for how long they had been at a safety stop, they could face dire consequences.

When moving through the water column the watch will experience drastic changes in pressure, and if the military timepiece is not designed to handle this, it will fail.

The United States has been issuing specifications for watches that military personnel are to wear should meet for quite some time. The military specifications provide specific requirements for the watch to meet in order for it to be used as a military timepiece.

These requirements include a variety of things, most aspects of a watch, including things like the size of the face of the watch, the width of line markings on the face of a watch, and the shape and color of symbols on the watch face.

Military timepieces also vary greatly with regards to their functionality and quality. General-purpose watches, for example are not as durable as the watches designed for diving purposes. The cost of production can also vary greatly depending on the components of a watch, who manufactures it, and what it is designed to do.

Military watches and timepieces are currently highly sophisticated. Many civilians also collect military timepieces. They collect them for many reasons, including the fact that they are built to known specifications to perform specific functions. Buying the average commercial watch comes with some uncertainty, but a military timepiece is reliably built to exacting specifications. This way the buyer knows what they are getting.