Have you ever wondered how to read military time quickly and easily? Or even wondered what it was, or why it exists? Well, welcome to the Internet’s greatest authority resource on just that! On this page, you will find the answers to that and more in great detail, in other words, everything you will ever need to know about military time (or astronomical time), as well as some quick and easy tips on how to read it.

It is based on a 24 hour clock, and is a method of keeping hours in which the day runs from midnight to midnight and is divided into 24 hour increments. It is the most commonly used interval notation in the world.


How to Read Military Time

There are only two things to remember to help you tell military time:

This method of keeping time is most commonly used by the military, government, public transportation, hospitals, meteorologists, astronomers, those employed in emergency services, and also with computers. When speaking in military time, 07:00 may be stated as “zero seven hundred” or “oh seven hundred”. Also, in the military, these time stamps are often written without the colon, so 07:52 would rather be written 0752. 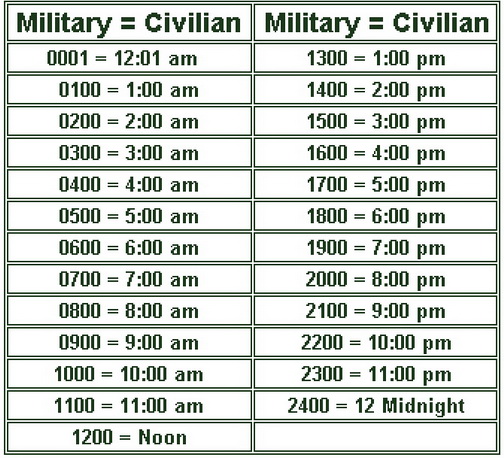