What are Time Zones?

Time zones, put simply, are vertical sections of the world that have the same time. This is for convenience in civil and administrative purposes, as well as trade and business. To put it visually, imagine a protractor (a device for measuring angles) on the north pole, and then divide the entire world from there down to the south pole into 24 equal, 15° sections (given that the world, being round, has 360° of longitude).

Beginning at the prime meridian in Greenwich, England, the time in each time zone increases by an hour going east, and decreases by an hour going west. Then, to avoid essentially spilling over into the next day, the antimeridian – that is, the opposite meridian to Greenwich, between Russia and Alaska – functions as the International Date Line. That way, if, say, it’s 3 in the morning on a Tuesday in England, then it’ll be 3 in the afternoon on a Tuesday in Eastern Siberia, but 5 in the afternoon on a Monday in Alaska. Every 15°, time is an hour ahead or an hour behind Coordinated Universal Time (UTC) – exactly how ahead or behind a time zone is is established through its designated offset. For example, Hong Kong is in UTC+8, which means the time zone has an offset of 8 hours from UTC, going east.

But, not everybody sticks to those rules. Although time zones are observed practically everywhere on the planet, there are a lot of exceptions to the basic rule of time changing by an hour every 15°. Some places only change their time from the previous time zone by half an hour (Newfoundland, India, Iran, Afghanistan and parts of Australia to name a few), or in integers of 15 minutes (Nepal and the Chatham Islands).

Then, there are places where time zones are completely warped. China, Greenland and India are notorious cases, where one time applies to the entire country – and China is a pretty big place, large enough to possess 5 separate time zones. In fact, before 1949, it did have 5 time zones. 27° latitude, north of the equator in South Asia is another strange area, where the time zones from Pakistan to Myanmar, west to east, go: UTC+5 (Pakistan), +5:30 (India), +5:45 (Nepal), +5:30 (India), +8 (China), +6 (Bhutan), +5:30 (India) and +6:30 (Myanmar). It was even stranger when Pakistan had Daylight Saving Time, which put it at UTC +6 during the summer.

Europe’s time zones are another case. Although France and Spain fall within UTC 0, they’re part of Central European Time: UTC+1. France was put on CET by the Germans in World War II, as was Amsterdam, which put itself 10 minutes ahead of UTC before the war.

In essence, this leads to a rather chaotic observing of time throughout the world, especially when compared to calculated solar time – however, the conveniences of skewing time zones to ease government and business practices within countries outweigh the need to follow a strict time system. The drop of usage in Daylight Saving Time east of Europe also led to many places, notably in Siberia, observing instead irregular time zones to make up for the loss of DST.

When were Time Zones implemented?

Before time zones were the norm, time was determined by geographical location – which means, for about every degree of longitude, time differed by around 4 minutes. This was all good for a while, but became a nuisance when the railway system and the telephone came about and slowly got things going into a modern direction. Great Britain started standardizing country-wide time in the 1850s, introducing Railway Time which coordinated with Greenwich Mean Time (GMT); but it took until 1880 to make Britain’s legal time correspond with that. By then, its colony New Zealand was also observing its own standard time on the other side of the world.

The United States inaugurated four time zones on November 18, 1883, which were used primarily by large cities and railroad companies. The zones were revised and became law as Standard Time through US Congress on March 19, 1918.

By the 20th century, almost all countries were on their own kind of standard time, but barely any of them were using offsets of GMT. The International Meridian Conference had already declared a 24 hour global day as based on midnight at Greenwich, but stated that it “shall not interfere with the use of local or standard time where desirable.”

It took until 1929 for most countries to adjust to a GMT-based system, but standardizing global time zones took until 1986, which is when Nepal adopted an offset of UTC+5:45.

Fun fact: Before Britain adopted GMT nation-wide, many clocks had two minute hands – one for local time, and one for Railway Time! 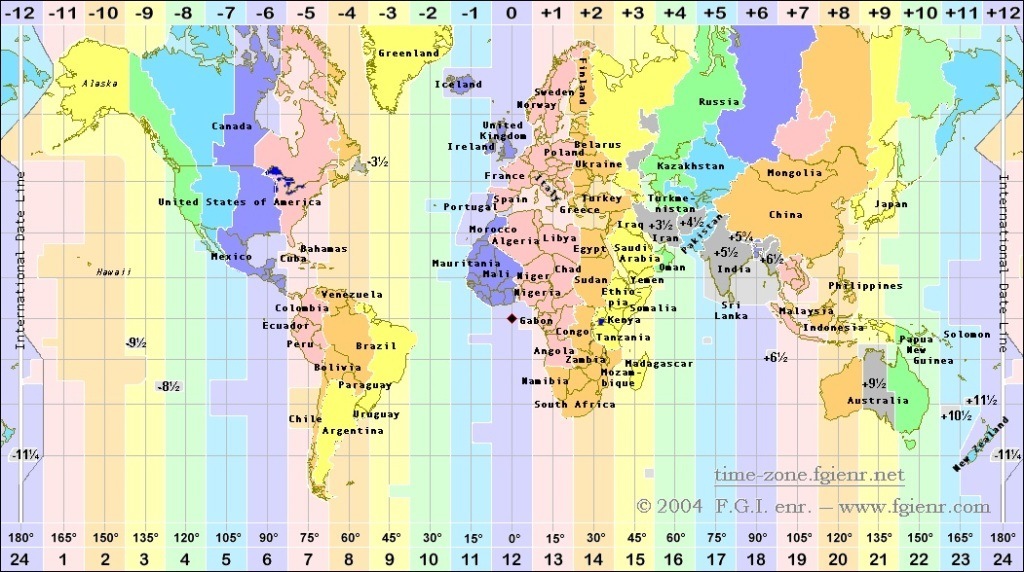 Time zones of the world

What is Daylight Savings Time (DST)?

All About Coordinated Universal Time (UTC)