Have you ever talked to a friend abroad, and asked: “what time is it over there?” before heading online and checking it out for yourself? If you have, you might remember that, say, if your friend was in New York City, beside the current time online was an acronym: UTC-5 (UTC-4 with Daylight Saving Time). That acronym stands for Coordinated Universal Time, or Universal Coordinated Time, and its title does a pretty good job of giving you an idea of what it does. As expected, it’s the global time standard by which timing centers all around the world base their own time, and it aims to be so accurate so as to limit differences with UT1. But, wait, UT1? What is that? And UTC? Why doesn’t the acronym match up with the term?

Why is it Abbreviated as UTC?

Let me explain. Firstly, when UTC was first introduced, it was widely used both in English and French – which led to two popular acronyms: CUT for Coordinated Universal Time, and TUC for temps universel coordonné. As a compromise, UTC was decided upon as the official acronym for the term (oh, the concessions made to the French).

The Nuts and Bolts of Technical Time

A side benefit of the above is the even further shortened acronym: UT, which stands for Universal Time. Variations on Universal Time are expressed with a digit following the UT, such as UT0 and UT1. UT1 stands for Universal Time version 1, and it’s the principle form of Universal Time – in other words, time based directly on observations of space. UT1 and UTC are both part of the time standard; however, UT1 isn’t used globally, and the method to obtaining it varies from UTC, as well. In fact, here comes the cool part: UT1 is measured through laser ranging the Moon, analyzing GPS satellite orbits, and observing quasars. What are quasars? They’re the most energetic and luminous (the intensity of their light) class of celestial phenomenon (things that happen in space) categorized as “active galactic nuclei” – the center of galaxies. Quasar is an acronym for the term quasi (meaning somewhat)-stellar radio sources – and in this case, radio isn’t referring to the appliance, but to radiation – in other words, light and cosmic rays.

But, we’re getting off topic now. There are other versions of Universal Time that attempt to smooth out UT1 by filtering out the variation of tidal forces from the Moon, and seasonal changes, yet it remains to be the accurate description of time based on celestial objects.

In a nutshell, Coordinated Universal Time (UTC) is the most widely accepted time standard by which time and clocks are regulated. It is based on TAI, or International Atomic Time (TAI – this time based on the French), which measures time in seconds as defined by the International System of Units (SI, also French) – which also works on exactly defining other things, like a gram, a meter, an ampere and so on. Atomic, in this case, refers to how the atoms of the element caesium are observed to tell how long a second would be. In regards to accuracy, today’s atomic clocks built on the concept are said to be off by about 2 seconds since the extinction of the dinosaurs, a whole 66 million years ago. Not bad.

A Brief History of the UTC

The history of UTC traces back to the International Meridian Conference of 1884, in Washington, D.C. At that time, the Universal Day was defined by GMT – Greenwich Mean Time, as observed in the Royal Observatory in Greenwich, England. However, astronomical observations of the 19th century were unstable, and somewhat inconvenient; yet had no equal until 1955, when the first caesium atomic clock was invented. Over the next five years, changes in radio technology came to a conclusion for the time dilemma in 1960 when the Royal Observatory, the U.S. Naval Observatory and the UK National Physical Laboratory synchronized their radio broadcasts – what resulted was a coordinated Universal Time.

UTC, although not named so until 1967, was officially started on January 1, 1961, and differed with the defined TAI second, following the revelations of 1958 in regards to the ephemeris second, which is based on movement in the solar system. Improvements in the atomic clock brought the TAI second practically on equal grounds with the ephemeris second, and after deciding that not synchronizing UTC with the TAI second was a bad idea due to frequent leap (skipped) seconds, the two became coordinated.

Since January 1, 1971, 10 years after the implementation of UTC, UTC seconds have been in coordination with TAI seconds – and since then, we’ve been consistently following UTC time worldwide. 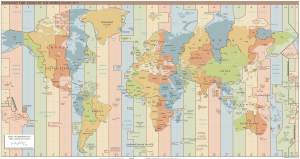 UTC is the standard used to synchronize time over internet networks. It is also referred to as Zulu Time, especially in the field of aviation. This is to avoid confusion with various time zones or time zones adjusting for Daylight Savings Time.

When accuracy to the fraction of a second is not required, it is acceptable to use either UTC or GMT. While GMT used to be the time standard, and was adopted as such during the Washington Meridian Conference in 1884, the lack of ambiguities in UTC, as well as its unparalleled millisecond precision, is why it is the standard today.

UTC is used as the basis for public standard time in many countries worldwide, including the United States of America and all its territories. It is the corresponding civil time for other countries such as Ghana, Iceland, Mali, Liberia, and Senegal, as well. It is also the standard for various radio stations that announce time, such as the NIST (National Institute of Standards and Technology), and other prominent radio station call signs such as WWV and WWVH. The UTC is also obtainable from GPS satellites.

Fun fact: The term GMT is often used informally – most scientists no longer consider GMT valid other than for historical purposes.

What is Daylight Savings Time (DST)?