Home
More
How does a Sundial work?

What is a Sundial?

Long before the age of clocks and the time of pocket watches, mankind had to come up with a simpler way to tell the time of day – a sundial is a device that does just that. The concept is simple: a flat surface adorned with a style is placed in plain view of the sun as it moves across the sky, and as the day goes by and the sun’s angle changes relative to the sundial, the shadow cast by the style changes appropriately.

But wait, let’s take a step back. Style? What is that? Well, in this sense, it isn’t an aspect of writing, fashion or artistic sense – it’s an old word, a stepping stone to the word stylus, and refers simply to a rod. On a sundial, this rod is also sometimes substituted for a triangular blade called a gnomon (this means “one that knows” or “examines” in Greek, and is pronounced as “no-mon”).

To properly work, a its gnomon must be aligned parallel (or along) the axis (or centerpoint of rotation, like the middle of a spinning top) of the Earth as it rotates – otherwise, the gnomon would have to be adjusted based on location due to the Earth’s changing position throughout the year, to make up for a lack of accuracy. As we’ve progressed mathematically, more sophisticated sundials have been built, including ones that incorporate hour lines that make up for the time differences, as well as ones with cylindrical, spherical or conical surfaces.

Yet, before these things were figured out, sundials provided a fairly accurate time of day, being off by only about 15 minutes throughout certain periods of the day, depending on the season. They are also heavily dependent on location – dial makers have to take into account the longitude and latitude of their location, as well as the direction of true North (for dial makers in the Northern Hemisphere) or true South (for dial makers in the Southern Hemisphere). In the Northern Hemisphere, gnomons have to point north – the opposite is true in the Southern Hemisphere. Hour indicators on the face have to be set according to the dial’s location, to avoid miscalculations.

Who Invented the Sundial? 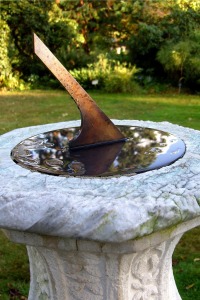 All about the sundial

While we don’t know who exactly built the first one, we do know that the oldest known were found in the ancient kingdoms of Egypt and Babylon, with the oldest being over 3,500 years old. It used to be thought that before these so-called “shadow clocks”, obelisks (or large, vertical stone blocks) were also used to tell time, although most ancient obelisks seem to have little more use than as memorial monuments. The Chinese are thought to have developed sundials a long time ago, as well – but, there aren’t many records or significant finds.

Without further evidence, we have to assume that these are the earliest examples of time-telling through the use of shadows and the sun, but it’s possible that we used similar tools in the past to tell the time of day, and that these tools have simply vanished over the centuries.

After the Egyptians, the Greek and the Romans further worked on the sundial, with the Romans developing an entire array of new designs, ranging from those with concave (curving inwards) hemispherical surfaces, concave conical surfaces, those built to judge time with light rather than shadows, by using a small hole rather than a gnomon, and double-bladed ones. They even built a huge sundial, the Solarium Augusti, in honor of one of their emperors, Augustus, in 10 BC.

Greek designs made it into the Arab world as well, and lived on past the Romans into the days of the Renaissance, remaining popular until as recently as the 16th century, at which point spring-driven pocket watches, and later, pendulum clocks, eventually led to the invention of modern electric clocks.

Fun fact #1: One of the world’s tallest towers, the Taipei 101, also functions as a chronologic device, using colors to tell the day of the week, and acting as a giant gnomon, using the surrounding park area as a dial.

Fun fact #2: The Washington Monument is, in fact, a gigantic sundial when viewed through google maps. The shadow of the tower changes with the time of day. Just another fun, hidden-in-plain-sight detail. Ken Norton, a partner in Google Ventures, confirmed this in a tweet.

A History of the Lunar Calendar